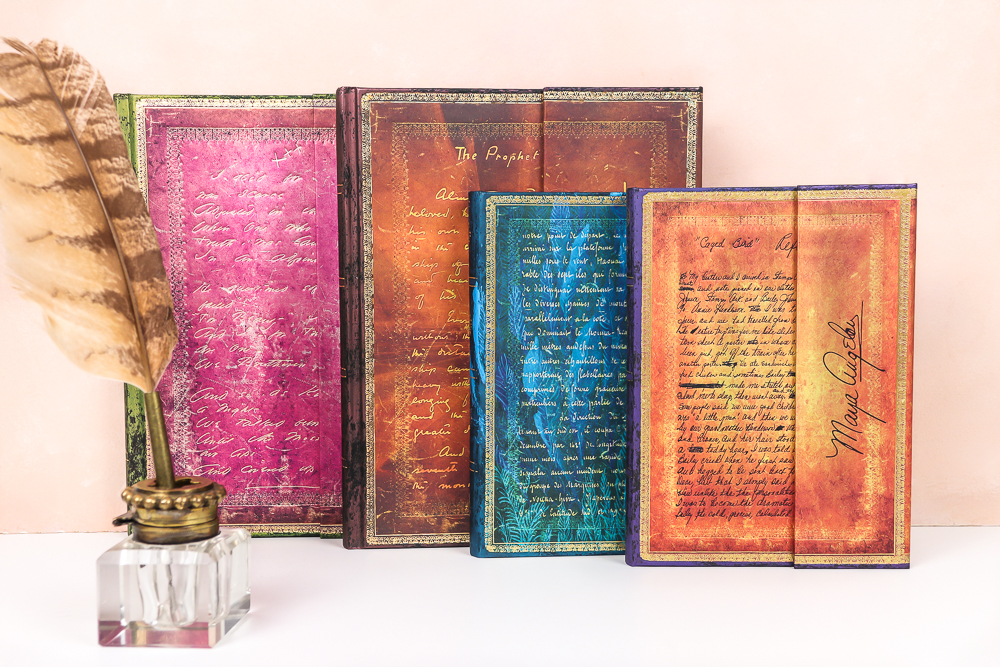 Today is Handwriting Day, and we can’t think of a better way to celebrate it than to highlight the beautiful penmanship of some of the great authors, thinkers and artists portrayed on the covers of our Embellished Manuscripts Collection.

Gibran Kahlil Gibran (1883–1931), usually referred to in English as Kahlil Gibran, was a Lebanese American writer, poet and artist.

The handwritten draft we have reproduced on our cover is an early English draft of Gibran’s The Prophet, one of the most translated and bestselling books of all time. The original manuscript comes from the holdings of the Princeton University Library’s Special Collections, Manuscripts Division.

Published in 1969, Maya Angelou’s coming-of-age memoir, I Know Why the Caged Bird Sings, was an immediate national bestseller and a critical success. On the manuscript page reproduced here, Angelou captures the moment when she and her brother, Bailey, arrived in Arkansas to be raised by their paternal grandmother.

Today the manuscript is held at the Schomburg Center for Research in Black Culture, a part of The New York Public Library.

Giuseppe Fortunino Francesco Verdi (1813–1901) stands out as one of the greatest Italian composers to write opera. His instincts for finding the right material led him to create works that virtually define the general public’s understanding of opera, such as Aida and Rigoletto. His signatures remain so distinctive that other composers do not even attempt to use them, and his operas are still frequently staged around the world.

Featured on our Verdi, Carteggio journal cover is an excerpt from his correspondence. May his legacy inspire your own hand.

French novelist, poet and playwright Jules Gabriel Verne (1828–1905) is the author of some of the world’s most famous adventure stories. Remembered as one of the “Fathers of Science Fiction,” Verne is credited with being an inspiration for the steampunk genre, a movement championing science fiction based on 19th-century technology.

Through his collaboration with publisher Pierre-Jules Hetzel, Verne created the Voyages extraordinaires, a popular series of novels which included Twenty Thousand Leagues Under the Sea and Around the World in Eighty Days. Today, these two works stand as pillars of the science fiction genre. In fact, when developing our Jules Verne Embellished Manuscript we simply could not choose between the two – which is why we offer two unique Jules Verne titles reproducing pages from Verne’s handwritten drafts of these two works.

Among the finest poets America has ever produced, Emily Dickinson (1830–1886) lived a life of quiet yet intensely passionate solitude. A master of the short lyric poem, Dickinson had a preoccupation with death and immortality that permeated many of her greatest works.

“I died for beauty – but was scarce” is considered one of Dickinson’s major works and we are honoured to reproduce the handwritten draft on our cover.

We hope these journals, featuring the delicate penmanship of some of the greatest artists of all time, encourage you in your creative journey and inspire you to appreciate the beauty of handwriting.