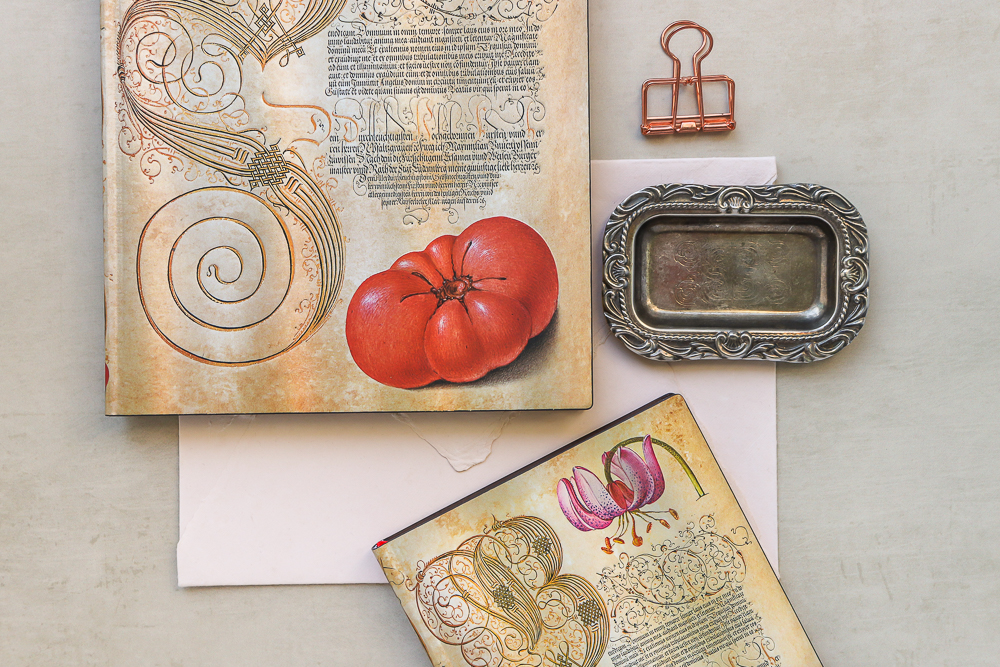 The art of still life painting is a celebrated part of Dutch culture, but this time-honoured artistic style didn’t emerge fully formed.

Before these artists came to be so celebrated, there were illustrators who delicately illuminated handwritten manuscripts to add emotional power to a written work.

One of the most renowned practitioners of this style of illumination was Flemish artist Joris Hoefnagel (1542–1601). In the 1590s the Emperor Rudolf II commissioned Hoefnagel to add his illuminations to the Mira calligraphiae monumenta, a mid-16th-century manuscript on the art of calligraphy written by Georg Bocskay.

The manuscript page from the Mira Botanica reproduced on one of our latest softcover Flexi notebooks is known as Martagon Lily and Tomato.

In making his additions, Hoefnagel not only included the usual flora and fauna elements, but enhanced Bocskay’s lettering with hybrid creatures and fanciful masks of the letters the writer had created. In using mediums such as watercolour, gold and silver paint, and ink on parchment, Hoefnagel aimed to demonstrate the superior emotional power of images over the simple written word.

The scientific naturalism of Hoefnagel’s botanical and animal drawings is what served as a model for future Netherlandish still life artists. Hoefnagel is remembered as being the last important Flemish manuscript illuminator and one of the first artists to work on the new genre of still life. In fact, one of his undated miniature floral pieces is regarded as the first known independent still life image.

The Mira calligraphiae monumenta (Model Book of Calligraphy) is celebrated as one of the last important examples of European manuscript illumination. With Bocskay and Hoefnagel, two masters of their field, at work, no one art form rises as superior. Instead, the calligraphy and illumination elevate each other.

Today, the book can be found in the collections of the Getty Museum in California.

Solve the Mystery of Your Next Journal with our new Sherlock...

Robyn @ Paperblanks - May 17, 2016 2
One of the most influential characters in not only detective fiction but the wider cultural lexicon, Sherlock Holmes set the standard for his genre....