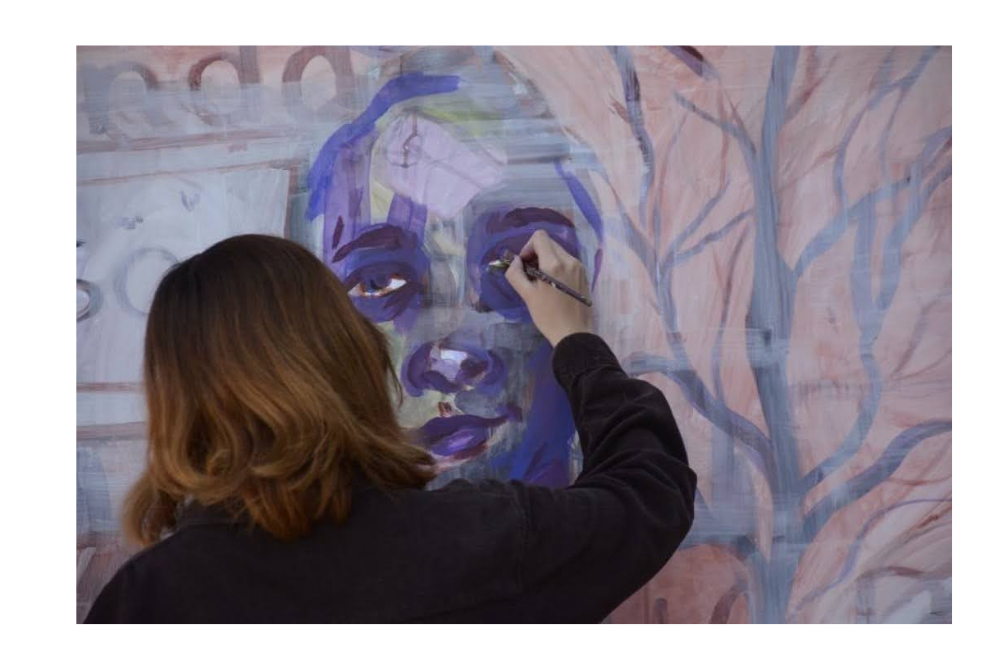 Art brings us together. It is the conductor thread that unites people from across generations and walks of life with a shared complicity – 100M was proof of that. The collective exhibition (where M stands for Mujeres, women) featured 100 Mexican female artists who used their art to honour the work and legacy of 100 Mexican women whose careers have set the precedent for subsequent generations.

For three days, the artists – from emerging to established, in their 20s or their 50s – worked in situ using painting, illustration, stencil, graffiti, embroidery or collage to create large format works that will hang for two months from the gates of Alameda Central in Queretaro. Fueled by their admiration for the women who came before them, and by the much-needed fight for equality, the artists represented and interpreted the common theme of being a trailblazer in Mexico: the struggle, work, talent and contributions of poets, painters, scientists, architects, entrepreneurs, patrons of the arts, activists and singers.

We are inspired by these brave women and these talented artists who, with thoughtful sensitivity yet fierce determination, created something special within an environment of sorority and hope.

Here are just a few of our favourites.

Bold white and grey brushstrokes with hints of purple that bring movement and rhythm in such a dynamic way that you can almost feel you are watching a live folkloric dance show. That is how artist and graphic designer Imelda Lizama portrayed Amalia Hernández (1917–2000), one of Mexico’s most prestigious dancers, a choreographer, a pioneer in developing Ballet Folklórico and founder of the world-renowned Mexican Folkloric Ballet, which brought Mexican diverse culture and folklore to the world. “I chose Amalia,” says Imelda, “because since I was little, I have had the fortune of learning folkloric dancing, where I experienced the benefits of discipline and dedication. My fascination for Amalia is absolute as, with passion and determination, she made our traditions an example of quality and excellence, showcasing the best of us to Mexico and the world.” @imelda_lizama_art

Antonieta Rivas Mercado (1900–1931) was a writer, intellectual, feminist and an important patron of the arts during the 1920s who also founded the Ulises Theatre Company and the Symphonic Orchestra of Mexico. History has often unfairly viewed her through the lens of the men in her life (her prominent architect father and her politician lover), but graphic designer and digital collage artist Lorena Campillo put special consideration into portraying Antonieta as an individual and the strong woman she was: her feet strongly grounded on the floor, surrounded by books and flowers, standing over her family’s house yet flying free, roaming the streets of New York with fellow intellectuals. “Since I was a teenager,” explains Lorena, “I’ve been attracted to Antonieta, her character, her story, and her commitment to the education of Mexican women. The opportunity to pay tribute to her has been very inspiring and enriching.” @eledesign_mx

Benita Galeana (1904–1995) was an activist who fought for paid maternity leave. A designer, painter and illustrator, Ana C Avila‘s work explores ornamental and corporal subject matters and she chose to explore the topic of safe, informed and voluntary motherhood, an important part of the feminist movement. Benita Galeana, along with Tina Modotti, Frida Kahlo, Adelina Zendejas and other fighters for social justice, set the path for a feminist Mexico by founding Frente Unido Pro-Derechos de la Mujer (United Front Pro-Women’s Rights). “This piece is an homage to their fight and a reminder to keep the flame of their ideals burning,” explains Ana. @scorpia.mx

Elsa Ávila (born 1963) is a mountain climber and the first Latin American woman to reach the summit of Everest. She began her rock-climbing career at age 15 and has since completed ascents in Yosemite, the Rockies, the Alps, the Andes, the Himalayas, Patagonia and Baffin Island. Elsa’s philosophy and her attitude in confronting risks have allowed her to reach high points in many areas of life: as a businesswoman, lecturer and writer. Artist Adriana Rangel uses her signature style of wavy organic shapes and muted hues to represent Elsa triumphant on top of a mountain. “I chose Elsa because she inspires me and motivates me to achieve high goals,” explains Adriana. “I identify with her because we both enjoy sports, she climbs, and I love running.” @adri_rangelpe

This artist might be the youngest from the show featuring the work of the youngest woman in M100. Born in 1982, Fernanda Melchor is a writer best known for her novel Hurricane Season, for which she won the 2019 Anna Seghers Prize and was shortlisted for the Dublin Literary Awards. At only 18 years old (and still working on her B.A. in visual arts), Sara Gándara is a visual artist who loves to paint, draw and create. “Art is everything for me,” she says, “and I don’t think I’ll ever stop growing as an artist.” Using acrylic and collage, she portrayed Fernanda holding her novel, surrounded by stars and dragonflies. She chose Fernanda Melchor because she saw herself reflected in Fernanda’s work. “It was wonderful for me to represent her,” says Sara. “I admire her and I think she is currently one of the writers with the strongest voice when it comes to social issues, and particularly gender violence, and she should be even more renowned. She is wonderful!” @chica_lunar9

Javiera Cervini Silva (born 1972) is a professor in Environmental Engineering and PhD in Environmental Chemistry. She has received multiple awards and since 2003 has been part of the team at the NASA Astrobiology Institute. She currently studies the possibility of life on Mars and that’s what drew artist Yazmín Obregón to choose Javiera for her mural. Leading a team of four visual artists – Linzee Obregón, Marilu Álvarez, Victoria Álvarez and herself – Yazmin designed a background with a gradient graph, and at the forefront Dr. Cervini studying as a central figure, while the molecular structures she writes rise up into the sky to form constellations of stars surrounding Mars. @artbyyazmin @linzeedesign @marilualvarezmx @artbyvict

Lucero González (born 1947) is a feminist, sociologist and photographer. In the 1970s she was part of the Women’s Liberation Movement and the collective La Revuelta which published one of the first feminist newspapers in Mexico. Her two passions – human rights and photography – led her to focus on the women she photographs, helps, listens to, questions and inspires to stand for themselves. Today she is the director of the Museo de Mujeres Artistas (Female Artists Museum). Visual artist Marcela Rosado specializes in painting, sculpture and ceramics, and continually exhibits individually and collectively in Mexico, the U.S. and Europe. She chose Lucero González because she is inspired by not only her artistic trajectory but also her commitment to feminism and the defense of women’s rights.  Inspired by Lucero’s photograph “My daughter myself” Marcela painted the silhouettes of mother and child sitting on an armchair next to these words by Lucero: “I’m from here, I’m a woman and all this has accompanied me like a symbol of creativity, strength and this inner engine.” @lucerogonzalez1968 @mrosadoarte

Artist Sara Sax likes to interpret reality using simple strokes whether through painting, sketching or sculpture. For 100M she chose María Luisa Dehesa (1912–2009), the first woman in Mexico and Latin America to graduate with a degree in architecture. “As I see it,” explains Sara, “to conquer spaces there must be three women: the first one tries, she does not succeed but she tries and sows the idea that it can be done; the second woman succeeds, she conquers that first place and after her comes the third one who carries the torch. María Luisa was the second woman to attempt it, she conquered it and opened the door in a world where – even today – it’s difficult to have a spot, especially in architecture. I think that if any girl or any woman learns about these women embodied in 100M she’ll see that she is not alone, every day there are many of us trying, succeeding, and carrying the torch.” @sara_sax_jazz

María Félix (1914–2002) was one of the most successful actresses from the golden age of Mexican film in the 1940s and 50s. Her natural beauty was so compelling that muralists like Jose Clemente Orosco and Diego Rivera immortalized her in their work. Yet Maria’s personality was her true strength, and was what inspired artist and creative entrepreneur Minerva Velázquez to choose María Félix for her mural using combined techniques of acrylic and photography. “María Félix was ahead of her time,” says Minerva. “She always stood out for her strong personality, and irreverent thoughts that no doubt broke every feminine stereotype in Mexico at the time. She will be remembered by her philosophy that a woman should be valued and make herself valuable.” @miinerviiuchiizz

Martha Isabel “Pati” Ruiz Corzo (born 1953) is an activist and environmentalist who has dedicated her life to protecting the Sierra Gorda Biosphere Reserve and its communities. She has been recognized with numerous international awards for her work in sustainable development, biodiversity protection and activism on behalf of the Sierra Gorda in the state of Querétaro. She was the subject matter in María Fernanda Razo’s mural where she was represented against the backdrop of the Sierra Gorda mountains, becoming one with nature and species from the region. María Fernanda is a multidisciplinary artist who works with engraving, illustration and tattoo art. Her work reflects an interest in Mexico’s flora and fauna with touches of surrealism. “I chose Pati Ruiz Corzo,” says María Fernanda, “because I felt very proud of her work in the ecology field, especially in an area so close to me as Sierra Gorda Queretana, one of my favourite places in the country.” @manodeoro

María Valentina Ramírez Avitia or La Valentina (1893-1979) was a revolutionary and soldadera who, at only 19, fought during the Mexican revolution at a time when women weren’t allowed in the army. She decided to enlist wearing her brother’s clothes and hiding her long hair, and she even earned the rank of lieutenant before she was discovered and expelled. Illustrator and graphic designer Natalia Auza portrayed Valentina using her signature feminine aesthetic with vintage touches inspired by art nouveau and the Arts and Crafts movement, highlighting the words Reform, Justice and Law.

“I chose Valentina,” says Natalia, “because I think it’s important to bring to light the role of women during key events in our history. I’m very troubled by the fact that we assume women were not part of movements like the Mexican Revolution because we don’t get an education from all genre perspectives. We all know Disney’s Mulan story and we love it; it turns out in Mexico we had our own Mulan and nobody talks about her. My mural is inspired by the early 20th century aesthetic and has a format that refers to bills, where we usually find national heroes – most of them men.” @nataliaauza

Acknowledgements: The artists wish to thank Monica Garrido and Galería Municipal for organizing this event. The writer wants to thank Lorena Campillo for being our eyes and ears during the event.