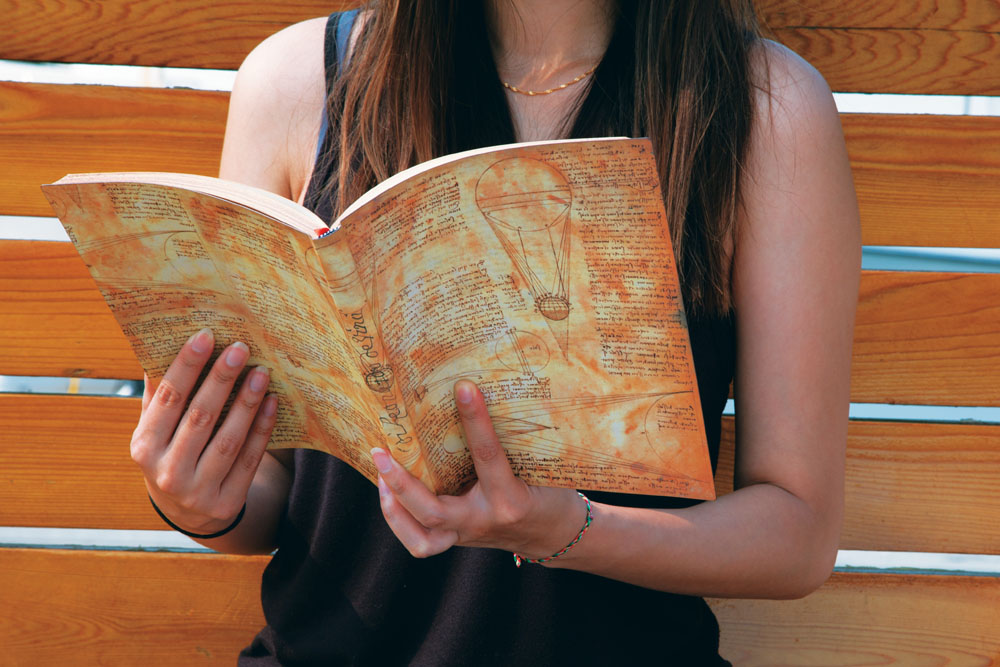 This Sunday, April 15th would have been Leonardo da Vinci’s 566th birthday – making today the perfect time to celebrate this original Renaissance Man.

Leonardo’s works in the realm of art, particularly painting and anatomical sketches, are well celebrated, but his achievements didn’t end there. Owing to a highly curious nature, his interests spread to fields like architecture, engineering, astronomy and beyond. In fact, it’s his observation on the play of light between the sun and moon that we’ve featured on our Sun & Moonlight Flexi cover.

So in honour of this great thinker’s birthday, we’re skipping his more well-known masterpieces like the Mona Lisa and highlighting some of his scientific innovations that have had a great impact on our world.

Leonardo da Vinci came up with a bunch of brand new inventions during his lifetime. The clock wasn’t one of them. Clocks had been around for centuries before he came along; in fact, the clock is one of the oldest human inventions. However, until Leonardo’s time during the 15th century, timekeeping had been done primarily using sundials, hourglasses or weighted clocks – none of them especially accurate. Da Vinci’s great innovation was to replace the weights with springs as the main operating pieces of the clock. He also designed two separate mechanisms for hours and minutes. Springs are still major components of many analog watches and clocks today.

While the term “aerial screw” may not be well known, the vehicle it inspired certainly is. Da Vinci’s idea was to have the “Helical Air Screw,” as it was also known, compress air in order to propel the vehicle vertically. And while Leonardo never actually built his device, it’s believed that his sketches were used to inspire the first helicopters, built in the 1940s.

Like the Aerial Screw, Da Vinci didn’t actually test his parachute idea during his lifetime. Triangular in shape, his chute was to be crafted from a wood frame covered by linen. He believed it would allow someone to land safely from a great height. It wasn’t until 2000, when daredevil Adrian Nichols tested it out, that Leonardo’s hypothesis was proven. In fact, Nichols felt this parachute offered an even smoother ride than those he was used to!

Leonardo’s self-propelled cart has the distinction of being an early version of two major innovations: the automobile and the robot! Powered by coiled springs, his cart also featured steering and braking capabilities. Releasing the brake would drive the cart forward, and it could be set to drive straight or at an angle. At the time motorized vehicles had not begun to be conceived of, let alone robots, and so Leonardo’s sketches confounded scholars until the 20th century when these concepts began to be developed. And then in 2006, a team at the Institute and Museum of the History of Science in Florence, Italy, built a model based on his drawings – and it actually worked!

Writing Wednesday: 10 Most Iconic Closing Lines of All Time

Robyn @ Paperblanks - March 29, 2017 0
If the opening line of your novel is incredibly important because it's what entices readers to read the rest of the book, then the closing...