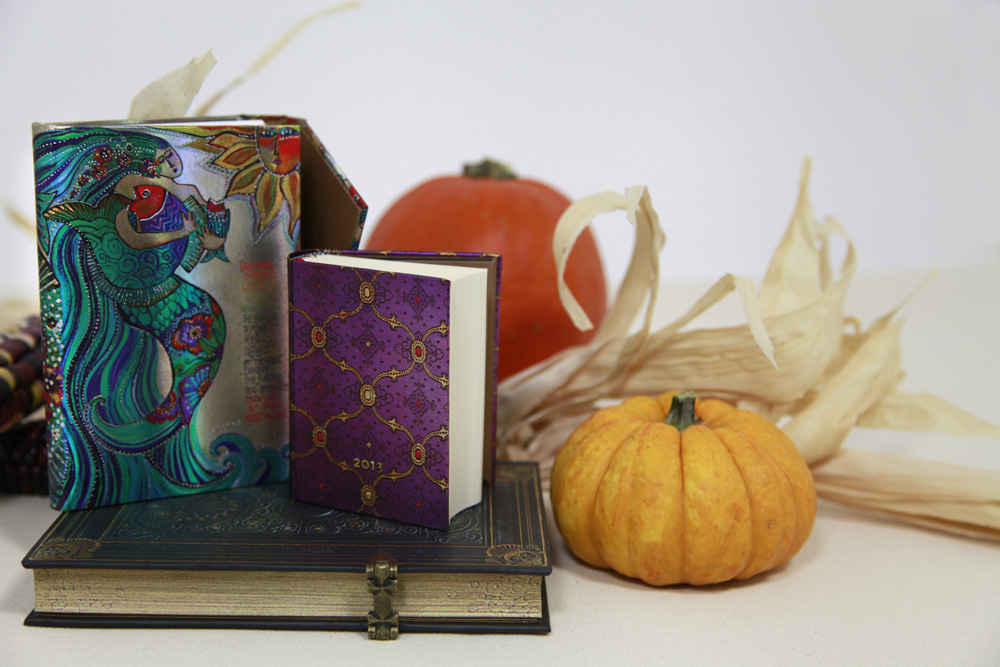 October 31st is here and that means it’s time for all of us at Paperblanks to wish you a Happy Halloween! In honour of this day of costumes, candies and spooky stories we’ve put together a list of the top seven haunted libraries from around the world.

The Peoria Public Library didn’t stand a chance of not being haunted, as its first three directors all died under mysterious circumstances. Whether being hit by a streetcar, dropping dead in the middle of a meeting or committing suicide by arsenic, the deaths of these directors doomed the library to rumours of curses and hauntings. The story goes that the original owner of the library’s land, Mary Stevenson Grey, cursed the property in 1847 after the death of her nephew. Even though the original building has been demolished and replaced, the curse is so strong that the ghosts of those ill-fated directors continue to haunt the Illinois library to this day. Apparently arsenic is the weapon of choice for library directors who later come back to haunt, as the first librarian of the Africana Library drank the poison after he was found to be doctoring his accounts. Visitors to the historic building have reported seeing the restless spirit pacing the halls, tinkling teacups and dropping books at odd hours.

3) The Grange Library at the Art Gallery of Toronto (Toronto, Canada)

The Grange is a manor in downtown Toronto that is almost as old as the city itself. Being the twelfth-oldest surviving building in the Ontario city means that the history of the Grange all but guarantees a good ghost sighting or two. And indeed there have been many such reportings over the years, with the most common one telling of a gentleman in a yellow velvet coat walking through walls where doors would have stood many years ago. The suggestion is that this man is the original butler of the Grange, who retired after fifty years of service by leaving a note stating, “Left dear old Grange at 1:00 o’clock p.m. to be [a] wanderer.” Perhaps he didn’t actually leave to wander at all! The Morealia Public Library is known for its rich history, stately beauty and creepy ghosts. Dating back to the 17th century, the building was first known as The Temple of the Company of Jesus and was turned into a library in 1930. That didn’t keep away those who wanted to keep company with Jesus though, as for years library visitors have reported a nun dressed in blue paralysing them momentarily with her ghostly presence.

The library of the historic Rammerscales Mansion is said to be haunted by its builder James Mounsey. Though Scottish by birth, Mounsey enlisted in the Russian Navy in the early 18th century but eventually fled home due to the political unrest in Russia and his fear that his closeness with Tsar Peter III would lose him his life. Even after holing up in the safety of his mansion, he never lost this fear and died a paranoid man in 1773. Since his death, Mounsey’s ghost is said to haunt the entire home with a preference for roaming the library. Visitors have reported hearing loud noises like doors slamming and seeing a figure running up and down the halls. Students staying at the mansion during World War Two were so frightened by this nightly visitor that they chose to sleep outside in the stables! Dating back to 1854, there’s no surprise that Melbourne’s State Library has more than a few resident ghosts. The Arts section of the library is reportedly home to the ghost of a former librarian named Grace. Said to be a benevolent elderly spirit, she continues to keep an eye on the place and make sure that a more confronting spectre, who roams the southern end of the closed Arts stack, stays in his place. The Music room is frequented by a nattily-dressed mustachioed ghost who is known to leave music books out of place after he is finished perusing them. The ghost stories of the State Library are so numerous that many clairvoyants have been brought in, and Melbourne’s Haunted Bookshop owner Drew Stinton is keen to get the building included on the city’s tour of haunted locales.

Perhaps the most famous haunted library of all is the one located in Combermere Abbey. Not necessarily famous for big scares or eerie origins, but because a fairly telling photograph exists from days long before Photoshop. Taken in 1891 the picture shows a faint but recognisable male figure sitting in the left-hand chair. The extra spooky part is that the second Lord Combermere had been struck by one of London’s first motorcabs just a few days earlier, and his burial was taking place at the very moment that Lady Sybell Corbet took the photograph. Four years later, paranormal researcher Sir William Barrett decided to look into the case by locking all the doors and setting up his camera in the library. When the photograph developed he was astonished to find that same figure (looking shockingly like the departed Lord Combermere) sitting in the chair! What do you think? Are there any truths to these spooky tales? Did we miss the most haunted library of all?

Robyn @ Paperblanks - January 15, 2014 0
The genre of science fiction is used to satirically reflect modern-day society. The most skilled authors do this while crafting fantastical stories, set in...