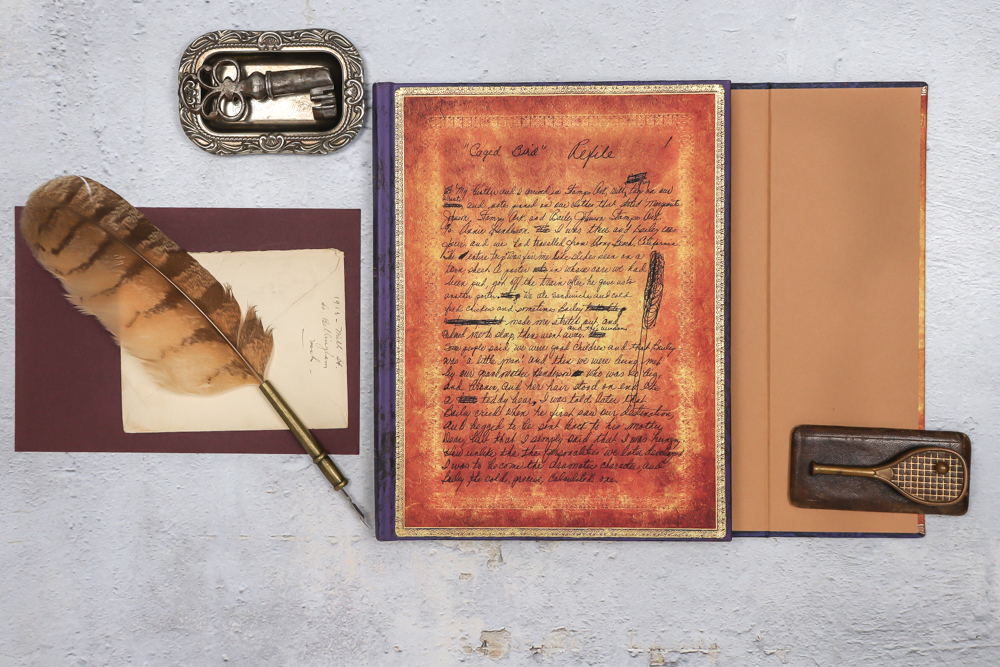 Published in 1969, Maya Angelou’s coming-of-age memoir, I Know Why the Caged Bird Sings, was an immediate national bestseller and a critical success. The book, the first in a series that chronicled her early life through the 1960s, helped to establish Angelou (1928–2014) as a major figure in American letters.

On the manuscript page from the book reproduced for our front cover, Angelou captures the moment when she and her brother, Bailey, arrived in Arkansas to be raised by their paternal grandmother and presages the personalities that she and Bailey would later develop.

The back cover depicts birds breaking free of their cage – along with the biographical information we include on every Embellished Manuscript journal.

Today Angelou’s I Know Why the Caged Bird Sings manuscript is held at the Schomburg Center for Research in Black Culture, a part of The New York Public Library. With connections to activist, literary and expat communities in the United States and Ghana, Angelou’s work encapsulates the Schomburg Center’s strongest holdings – stories of the struggles, triumphs and fortitude in the everyday vicissitudes of Black life.

We are honoured to partner with The New York Public Library to bring this fascinating document to our Paperblanks collection.

Angelou, I Know Why the Caged Bird Sings is offered as a midi and ultra lined hardcover journal.

6 Great Ways to Use Your Next Journal

Robyn @ Paperblanks - January 18, 2016 4
Did you receive a beautiful journal for Christmas? Great! ...so, what now? Taking that first step of writing in a new journal can often feel overwhelming...