Endpaper: The Paperblanks Blog
Home Our Designs Happy Birthday to These Cover Artists 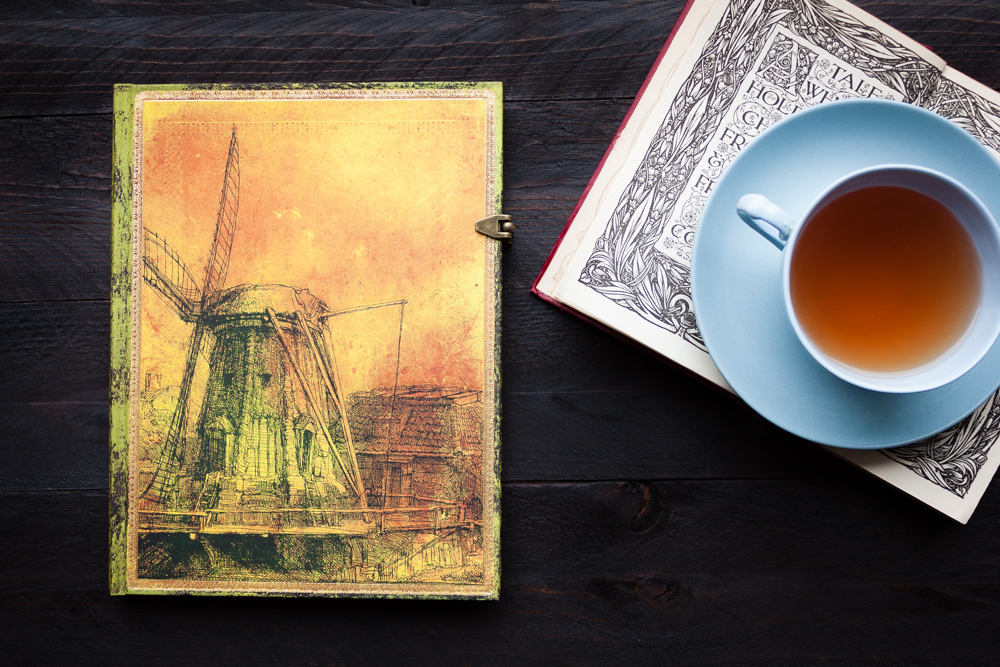 July is the month of long barefoot days and alfresco dining nights; it’s melting ice cream cones and ripe berries. July is also the birth month of many of our cover artists, so we decided to honour them by sharing a bit more of their creative and prolific lives.

Nikola Tesla (1856–1943) was a Serbian American physicist, futurist and engineer, and one of the greatest inventors of all time. He is best known for his notable contributions to the design of the modern alternating current (AC) electrical supply system.

The sketch reproduced on the cover of our Embellished Manuscript is of the inventor’s turbine research and is among the thousands of original documents that reside in the Nikola Tesla Museum in Belgrade, Serbia. What’s particularly special about this sketch is that it stands as one of very few drafted by Tesla himself. The inventor rarely put his ideas down on paper, relying instead on his innate ability to visualize objects and buildings in very fine detail, using only his imagination.

Born Valentine Louis Georges Eugène Marcel (1871–1922), Proust was a French novelist, critic and essayist, considered to be one of the most influential authors of the 20th century. He was best known for his seven-volume masterpiece In Search of Lost Time, an examination of French society and the causes behind losses of time, while also exploring deceit, jealousy and suffering. The first part was published in 1913, and by the time all seven volumes were printed, it totalled over one million words and largely lacked a plot.

Our Embellished Manuscript cover shows a page of the In Search of Lost Time manuscript. Its margins, filled with copious notes, show Proust’s perfectionist nature. He was known to revise his proofs over and over and in fact, he completely rewrote half of this first volume four times before finding satisfaction.

Today, his masterpiece has found its way into the canon of great works of the 20th century, while at the same time being far too overwhelming for most readers to actually finish. It remains notable for being one of the longest novels ever written.

The multitalented French author and illustrator Benjamin Lacombe grew up in Paris, where he pursued his schooling at the city’s iconic École Nationale Supérieure des Arts Décoratifs before publishing his first graphic novel at the age of 19. Now in his late 30s, Lacombe’s career has truly taken off, with his works published and translated around the world. With diverse interests ranging from painting and sculpture to cinema and music, Lacombe has come to be seen as one of the leaders of contemporary French illustration.

Lacombe’s style, described by the artist himself as a combination of pop surrealism and lowbrow art, has a vintage look while being distinctly contemporary. Our Esprit de Lacombe collection of Flexi notebooks features two of his lively designs, Frida and Madame Butterfly, where Lacombe’s ability to capture humanity and emotion is on full display.

Gustav Klimt (1862–1918) was one of the most significant artists of modern times. Klimt attended the Vienna School of Arts and Crafts where he trained as an architectural painter. As he painted interior murals and ceilings in public buildings, his technical ability endeared him to Vienna’s conservative haute society. But soon his inner boundary-pushing style came through, causing too much of a stir for the culturally reactionary class who had initially welcomed him so openly.

To pay tribute to his daring artistic vision, we’ve created two Special Edition covers – The Kiss and Portrait of Adele – that spotlight his “golden phase.” Painted during that period, these iconic pieces were destined to rouse instant recognition in both serious art lovers and those who simply have an appreciation for beautiful artifacts.

Undoubtedly one of the world’s greatest painters, Dutch artist Rembrandt van Rijn (1606–1669) was an equally accomplished etcher. In fact, he was a pioneer who became a master of the medium. Rembrandt transformed etching as an art form through technical innovations and the development of his artistic skills. Extraordinary nuances of shade and detail, as well as human emotion, sprang from his unique lightness of touch.

Rembrandt’s native Dutch landscape often provided the inspiration for his etchings and The Windmill, completed in 1641 and reproduced on our cover, is no exception. In The Windmill, Rembrandt portrays the “Little Stink Mill” that stood on the De Passeerde bulwark running along Amsterdam’s west side. It was so called due to the rather unpleasant aromas emanating from tanned leather being treated with cod liver oil by the Leathermakers Guild who ran the mill. Despite its unique name, not to mention smell, Rembrandt embraced the mill as a representation of the bridge between city and countryside. The remarkable level of detail, varying textures and depths of tone in the work reveal the artist’s unparalleled draftsmanship skills.

A novelist and playwright, Alexandre Dumas was a prominent figure within the Romantic movement and one of the world’s most widely read French authors. He was known for his historical novels of high adventure, and The Count of Monte Cristo (1844–1845) and The Three Musketeers (1844) were two of his most celebrated works.

As well as living a lavish lifestyle, Dumas travelled often, spending time in Belgium, Russia and Italy before returning to France in 1864. The Count of Monte Cristo takes place in France, Italy and the islands of the Mediterranean during the years 1815 to 1839 – the era of the reign of Louis-Phillippe and the period before Napoleon returned to power following his exile. This historical backdrop is a fundamental element of the book, as the adventure story is primarily concerned with themes of hope, justice, vengeance, mercy and forgiveness. Today the work is considered a literary classic.

Our Dumas’ 150th Anniversary Special Edition journal features on its front cover a handwritten draft of The Count of Monte Cristo, and the back cover shows an illustration of the prison where the Count was jailed.

Emily Brontë (1818–1848) wrote novels whose profoundness, subversive characters and fierce emotions stirred the rigid society of Victorian England and assured the author lasting literary fame. Today, her legacy (along with her sisters Charlotte and Anne) is one of the most revered in English literature.

Emily was born into the family of a poor Anglican priest in a small Yorkshire parish, with few opportunities for her to develop her worldview. But luckily the Brontë girls and their brother, Branwell, were raised in a household in which reading was an encouraged pastime. In isolation from the rest of the world, they conjured up and wrote tales about fantasy worlds, priming themselves for their future literary endeavours.

Dated June 26, 1837, the page reproduced on our Special Edition cover was written by Emily and is a part of one of the “papers” that the family would write together every four years or so. It references the family members’ activities during the day and their musings about the future. Emily and Anne were particularly close with each other, and the rough sketch taking up half the page is of the two seated at a table in front of the “papers” and the tin box in which they were kept.

Which one is your favourite cover? We’d love to hear from you!

Robyn @ Paperblanks - November 24, 2015 0
If you have always admired our French Ornate series but wish there could be a larger format for sketching, or love the neo-Renaissance style...