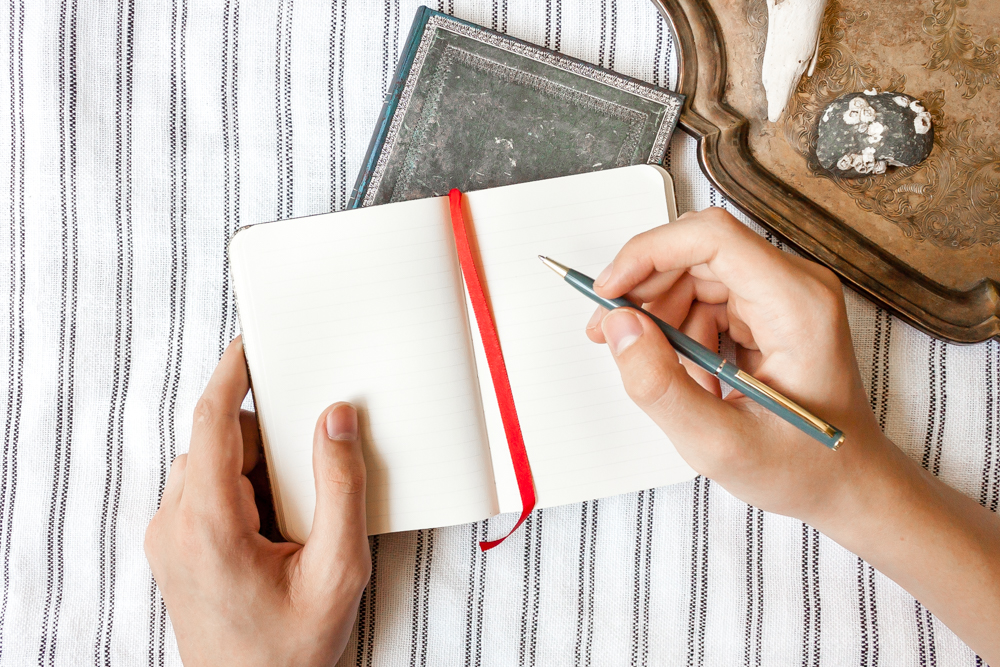 Yesterday, September 22nd, was Dear Diary Day and to celebrate we present seven of the greatest thinkers, adventurers and artists of all time who kept their thoughts preserved in a journal. Their notes – at times meticulous, at times tumultuous – offer us a unique firsthand perspective of significant moments in history.

Probably the most famous diary ever written, Anne’s account of her family’s flight during the Nazi occupation and two years hiding in an Amsterdam warehouse has enthralled readers for generations. With more than 31 million copies sold in 67 languages, The Diary of Anne Frank is one of the most widely read books in the world. She famously wrote in her diary on July 15, 1944, just weeks before she and her family were betrayed and arrested: “In spite of everything, I still believe that people are good at heart.”

Leonardo da Vinci kept notes carefully recording his ideas, inventions, studies and the travels of his mind in mirror-image cursive. Today, an estimated 7,000 pages from those journals survive. His sketches and copious notes allow us to peer into the mind of a genius, a consummate draftsman and sketch artist – a man of unquenchable curiosity spanning an infinite spectrum.

British adventurer Robert Falcon Scott attempted to be the first to reach the South Pole. On his first expedition, he set a new southern record by discovering the Antarctic Plateau, on which the South Pole is located. On his second venture, in 1910, Scott led a party of five which reached the South Pole on January 17, 1912. On his journey, he kept a diary of his daily progress. His final entry explained how a fierce blizzard had stopped his expedition just 18 km away from one of the places where they had stored their supplies. And one of his last entries read, “Had we lived, I should have had a tale to tell of the hardihood, endurance, and courage of my companions which would have stirred the heart of every Englishman.”

The only woman to be awarded two Nobel Prizes, Marie Curie pioneered research into radioactivity. It was Marie’s custom to write down all her observations and personal notes in the lab she and her husband kept. Thanks to these “notebooks of discovery” we have direct insight into the powerful minds conducting such important work into radium purification and measurement. Her notes and journals are on display at the Bibliothèque Nationale in Paris, with many of her discoveries contained within. While it is widely known that Curie’s health suffered as a consequence of her work, it also impacted her belongings and journals. Due to the potential dangers posed by the radioactive levels, today the Curies’ notebooks are kept in special lead boxes and are too radioactive to touch without protective lead clothing.

Mexican painter Frida Kahlo’s diary offers us an intimate record of the artist’s life. Frida also used her diary as a sketchbook and a cathartic release, filling its pages with colourful drawings as a way to connect with her feelings and express her pain – both physical and emotional – as well as her love for muralist and painter Diego Rivera. In 1953, the year before her death and following the amputation of her right leg, Frida wrote in her diary one of her most well-known phrases: “Feet, what do I need you for, if I have wings to fly?”

British author Charles Dodgson, known to most as Lewis Carroll, was said to have been a diarist since he was 10 years old. Nine of the diaries from his adult years survived, and in them are recorded the main activities and events in his life, as well as important pieces of information which he wanted to refer back to at some time in the future. Dodgson’s own subsequent notes and cross-references provide evidence that he did look back over previous entries, and this is probably one reason why he kept the left-hand page of the notebooks blank, so that he could include additional comments.

English geologist and biologist Charles Darwin was a dedicated archivist. Prior to keeping a personal journal, he had already achieved a degree of fame for The Voyage of the Beagle, the research notes he kept as naturalist for the ship H.M.S. Beagle, during its voyage exploring the South American coast from 1831 through 1836. Darwin observed and meticulously noted what he saw of the geology, animals and fossils in every location, and began gathering the first clues that would later form the foundation of his theory of evolution. He then started keeping a personal journal in August 1838, sometimes condensing a whole year of journal entries into one page of a 3- by 4-inch notebook.

It’s never too late to start your own journal! Open up your notebook and use it as a timeless way to record your thoughts and your own history.