Endpaper: The Paperblanks Blog
Home People & Interviews In Conversation with The Doodle Boy 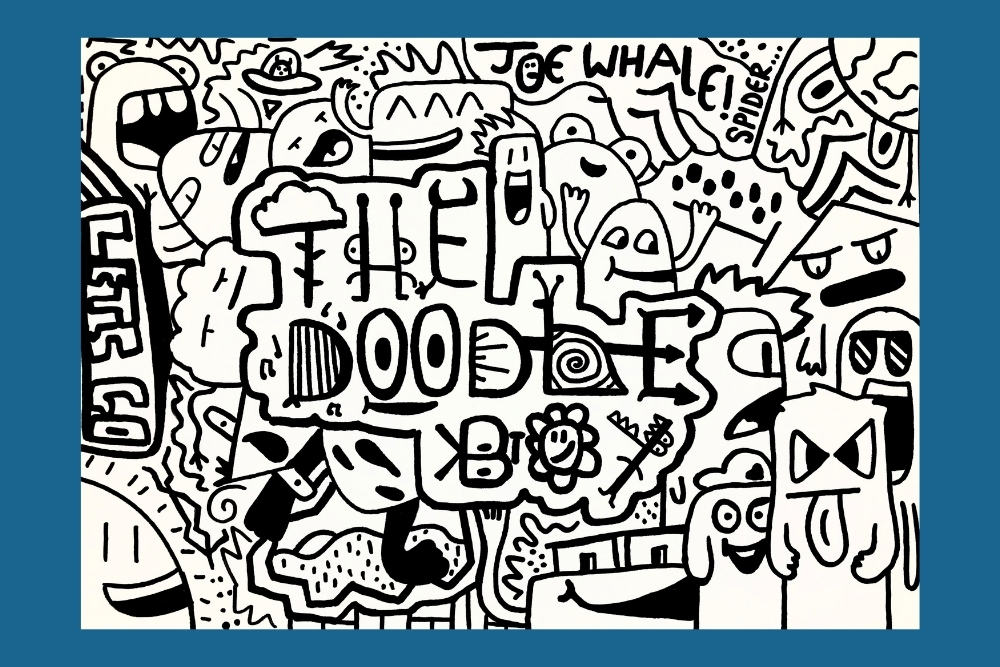 Joe Whale, better known as The Doodle Boy, might be only 11 years old but he’s already a thriving artist. His bold, deceptively simple drawings using a black marker have taken the internet by storm, and his list of collaborations includes a couple of commissioned drawings for the Duke and Duchess of Cambridge. Despite his rising success at such a young age, far from being a celebrity, Joe is a regular – albeit super smart and talented – kid who enjoys playing sports and going for walks with his dog, just like any other 11-year-old.

We reached Joe over Zoom at his home in Shrewsbury, England, where he lives with his parents, sister Phoebe and twin brother Jesse. It’s after supper and Joe is sitting next to his father Greg, who is wearing a green sweatshirt featuring one of Joe’s drawings. They are down to earth and very personable, and Joe is eager to share with me his artistic journey.

“I’ve always liked drawing,” says Joe, “but when I was about six or seven, I started doodling in this style. And I started doing it professionally when I was around nine, maybe ten years old.”

Joe tells me the story of how it all began. One day in class he had already finished his schoolwork and, wanting to keep himself busy, he started drawing on the whiteboard. The teacher was not amused and Joe got into a little bit of trouble, but his parents recognized this as Joe’s need to explore his creativity. They have always encouraged art and creativity at home and enjoy spending time working on art projects with their kids. So, they enrolled Joe in an after-school art class where he could freely explore his artistic vein. Impressed by his playful, minimalistic work, Joe’s art teacher asked if she could post his work on social media, which led to Joe’s first job: a nearby restaurant asked him if he wanted to do a doodle on one of their walls. Before he knew it, his work was making headlines.

Today, Joe has 113K followers from around the world and a YouTube channel where he shares drawing tutorials, yet he remains a very unassuming kid. I ask him if he ever thought he’d be that famous. “No, definitely not,” he says with a laugh. “I just did it because it was fun, but then it turned into this.” I’m curious about how it feels for an 11-year-old to be known worldwide, but Joe is grounded and sincere, like most kids that age. “It feels good,” says Joe, “but normally when I doodle or I do a drawing I don’t really think about that, I just do it like it’s just for fun. It still is! But that’s what I think of it. I don’t think of it as a job, I think of it as fun.”

I can see the pride reflected in Greg’s smile and beaming eyes, and I can tell Joe’s modesty comes from solid parenting. “We wouldn’t have it any other way,” says Greg. “If it starts to feel like it’s a job for him, we’ll just stop or we’ll stop taking on whatever feels like a job. Everything we take on we ask Joe, ‘Is this something you want to do or not? If it’s not, then it’s fine.’ He always says yes because he wants to draw all day, pretty much so.” Joe smiles widely in assent. “He’s an easy client on my side of things,” adds Greg.

Drawing inspiration from his surroundings, Joe’s monochrome doodles using simple lines over a white background have a sense of playfulness and an authentic naïve style, but what really catches the eye is the sense of whimsy in his characters inspired by everyday objects (there’s even a character based on a glass of water!), as well as monsters, aliens and other creatures. Far from being scary, the characters look friendly and harmless in the eyes of other children. “When I draw,” explains Joe, “I don’t want someone who sees it to feel scared. I want them to feel happy for what they see rather than scared or angry. I want them to feel good!”

Being left-handed requires extra work to keep from smudging the black ink over the pristine white background characteristic of Joe’s artwork. This is especially impressive considering that Joe doesn’t start his work outlining with a pencil but goes straight to black ink. Yet his approach to mistakes and smudges is lighthearted. “He is really positive,” says Greg. “He goes into every drawing not expecting to make mistakes, and anything that he would perceive as a mistake he just alters to a new creation.”

This perspective probably comes from a motto that circulates at Joe’s home. “There’s no right or wrong in art. It’s just a perception,” says Joe with a big smile. And that ties to his advice to anybody who wants to dive into drawing. “Be happy with what you do – well, that’s really for anything,” says Joe. “[When drawing], if you don’t like it, then do it again. If there are things that you do like, incorporate that into your other drawing until you really like it, and then practice things that you are the best at and that you like the most.”

As the interview draws to an end, I ask Joe to do a shoutout to a fellow artist he admires, as a part of our #ArtistSupportingArtists tradition. Joe doesn’t hesitate and immediately nominates London-based illustrator Geo Law. Joe and Geo recently did a doodle collaboration and the result was stunning – two very unique doodle art styles blending seamlessly.

The future holds many great things for Joe. He just received The Charlie Adlard Art scholarship at Ellesmere College in Shropshire, and new and exciting deals are coming up such as a book series with Scholastic, an animation contract with a UK producer and an apparel deal with a major brand. One thing is for sure: Joe is just getting started.

Auguste Rodin: One Of The Art World’s Original Bad Boys