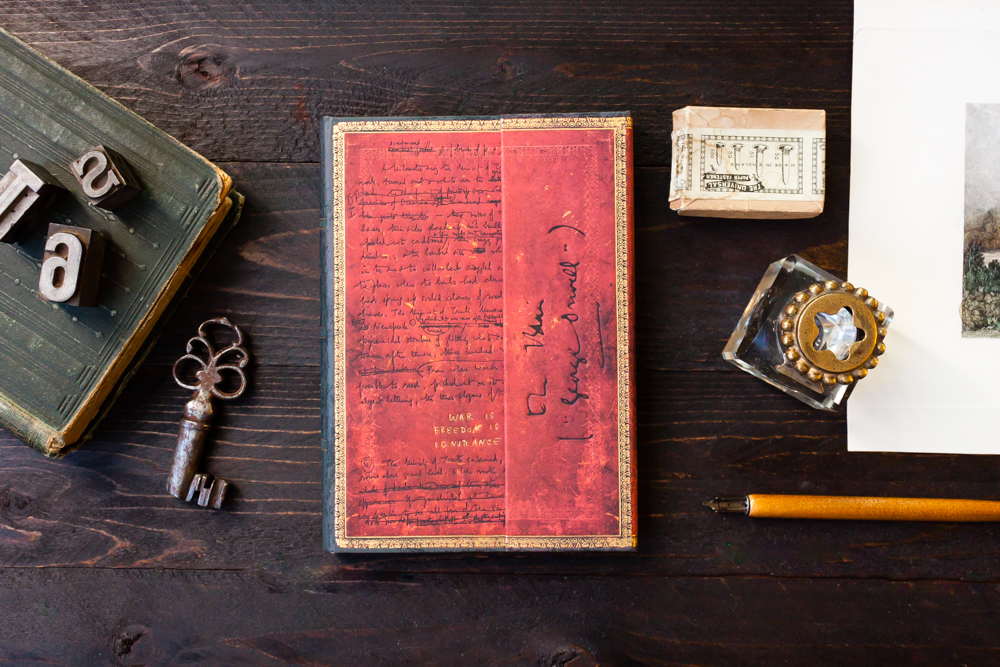 Today, on the anniversary of his death, we celebrate the work of George Orwell (1903–1950). Born Eric Arthur Blair, Orwell was an English novelist, essayist, journalist and literary critic remembered for his passionate commitment to democratic socialism just as much as for his lucid prose. He called upon his experiences as a member of the Indian Imperial Police in Burma in much of his writing, with a lingering sense of adventure yet keen awareness of the injustices he witnessed informing his work.

His strong opposition of totalitarianism is perhaps most strongly felt in his 1949 novel, Nineteen Eighty-Four. This dystopian piece of social science fiction introduced terms such as “Big Brother” and “thoughtcrime” into our social lexicon and continues to be one of the most widely read English-language novels. In recent years the novel has seen a resurgence in public interest, climbing to the top of bestseller lists due to its unnerving relevance in today’s socio-political climate.

Orwell was no great keeper of manuscripts; in fact, he famously instructed his literary executor to burn any remaining drafts when he died. Of all his writings, only one handwritten portion of Nineteen Eighty-Four survives. It contains four distinct stages of composition, written between 1946 and 1948, and accounts for nearly half of the final published work.

The surviving manuscript of Nineteen Eighty-Four resides in the John Hay Library at Brown University. It was donated by the author’s widow, Sonia Orwell, to a charity auction in 1952 and purchased by Scribner’s of New York. The manuscript was eventually purchased by Daniel Siegel, who published a facsimile edition in 1984 with help from the noted Orwell scholar Peter Davidson, before presenting the manuscript to the Library in 1992.

We are honoured to partner with the Brown University Library to bring Nineteen Eighty-Four, one of the great literary works of the 20th century, to our Embellished Manuscripts Collection.

“In a time of deceit telling the truth is a revolutionary act.”

A Medieval Masterpiece Joins the Paperblanks Collection with Inferno

Emily Dickinson Returns to Our Collection

Reintroducing Mirror Vine – The Winner of Our #Paperblanks25 Contest