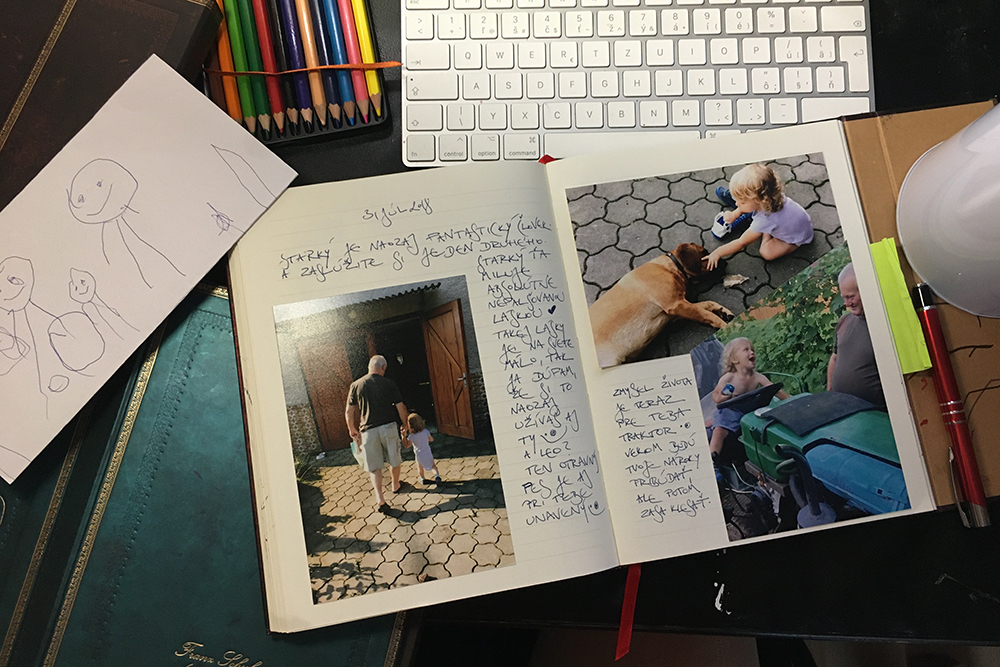 Nothing makes us happier than hearing that our notebooks are being used, loved and cherished. It fills our hearts with joy when someone writes and tells us how their Paperblanks notebooks are part of something special, so we didn’t want to pass up the opportunity to share this story with you.

A few weeks ago we were contacted by graphic designer Juraj Kadassy, who lives in Austria with his family. In January 2016, when he and his wife, Veronika, learned that they were expecting a baby, he bought a Paperblanks journal and began writing to his unborn son, Markus. We were so moved to hear that Paperblanks is such an important legacy for Juraj that we asked him for a little interview to learn more about the great gift he’s giving Markus.

Where did the inspiration for the journal come from?

When I was a little boy, I often asked my parents what it was like when my mum was pregnant or after I was born. My parents could never tell me the full story, which is what I always cared about; they only told me what they remembered. I often wondered what my parents felt like when I was ill or when I was really happy. Even today, I would like to know what kind of child I was during a time I can’t remember anymore. That’s why I decided that my son will know about all his days.

I wrote to him asking him to grow and be healthy so that he would be born healthy. I told him about the world he would be born into, how much we looked forward to seeing him and how thankful we were that he chose us as his parents. Each day described in the journal ends with a positive wish. And the entries tell the truth. That means also describing what a bawling, sulky, unbearable boy he sometimes was and that we were often desperate and didn’t know what to do, which happens in all families. I kept writing journals after Markus was born, and I still do. The journals cover more than 2100 pages about my son’s life, how he was growing up. They describe life situations not just about him, but also about where he comes from. We live in Austria and Markus was born here, but Veronika and I were born in Slovakia. I often write about my own childhood, about my father (who died long before Markus was born), about my father’s father. There are many stories about Markus’s ancestors in the journals, or at least what I know from my parents. I also describe the days he spends with Veronika’s parents who live in Slovakia. And that’s definitely not boring!

Do you involve Markus in the creation of the journals?

Markus loves being involved and sometimes he draws in the journals. I’m happy about it, because he’s creating his own childhood memories. At first, it was just doodling without any meaning, but gradually they have turned into something more meaningful to him.

When are you planning to give the books to him?

I thought it would be on his 18th birthday. But the journals are already his – they belong to him, so I don’t keep them a secret. I’m teaching him to appreciate these journals; he knows what I write about. He loves when I or his beloved mum read to him from the journals, and he likes the stories written in the journals more than fairy tale books. He knows how precious they are to us. All the journals are displayed in our bookcase in the living room thanks to Paperblanks’ beautiful binding.

What are your hopes for when he receives them?

As every father does, I wish for my son to become a decent man. Every parent sees their child as an opportunity to fix mistakes in their own lives. All parents think their children are the cleverest and the most skilled in the world. And that’s okay. That’s what it should be like! I hope that the world my son and his children will live in when I’m gone is beautiful and kind. I visualize how his children or grandchildren will read the journals. I truly believe that they will be very important for my own descendants, and not just for Markus. I’m sure about it!

Do you think Markus will continue the tradition when he has his own kids?

I can’t wait for Markus to start writing. I would like to lead him to keep writing his own journals. As I said, he loves when we read from them. He loves his life, and he likes hearing about other people mentioned in the journals – real lives and real people. That’s why I believe that his childhood spent with me and his mother will be so precious for him that he will want to show it to his children. And I don’t know whether he will do the same for his children, but I would like that very much.

What’s your advice for all us parents who want to keep a journal for our kids, but lack the energy or discipline to write in it every day?

Discipline is really the key to keeping a journal. Sometimes I don’t even know what to write about, because we spend the whole day at home, for example on a rainy day or when we don’t feel like doing anything. On those days, I have the opportunity to write about my mother, father or my own childhood. There’s always something to write about. Some days cover one page and a half, other days five pages. At first, it was difficult. When Markus was a baby, he was just sleeping, pooping and drinking milk, so there was not much to write about. Sometimes it’s enough to describe your feelings and you discover that you are changing. You find out that you feel much better than you did at the moment when you wished for the yelling baby to finally fall asleep. I’m a designer and creative work is my passion. That’s probably what helps me keep writing journals and stay disciplined. Writing is playing with emotions, words – it’s something magical that comes only from us.

Over the past six years, Juraj has filled 13 Paperblanks journals with his writings. He has also had friends and a handful of celebrities sign or write a note in Markus’ journals, from Austrian Formula One driver Niki Lauda to award-winning Czech director Jiří Menzel, triple NHL Stanley Cup winner Marián Hossa, Hans Zimmer and Hugh Laurie, to mention a few.  But probably the most precious text of all is the personal dedication that Juraj inscribes on the first page of each journal:

Whatever happens in someone’s life is for their own good. Even if you feel that something is unfair, have faith that the world is less unfair when you treat people with love and kindness. But don’t let others use you for their own intentions. Let others deal with intentions.
You, my dear son, keep your own wisdom and heart, which you inherited from your ancestors. My dear Markus, don’t become a soldier slaying other people’s lives. Always be creative, because that’s what gives meaning to other people’s lives.
Your father

Peek Inside… Laura’s Journals for Our Tips on How to Salvage...

Robyn @ Paperblanks - February 16, 2016 4
Our Peek Inside… series takes a look inside people's journals to celebrate their imagination and inspire others. Please send us an email if you...