Endpaper: The Paperblanks Blog
Home Creativity & Inspiration How to Be at Home – An Animated Short Film 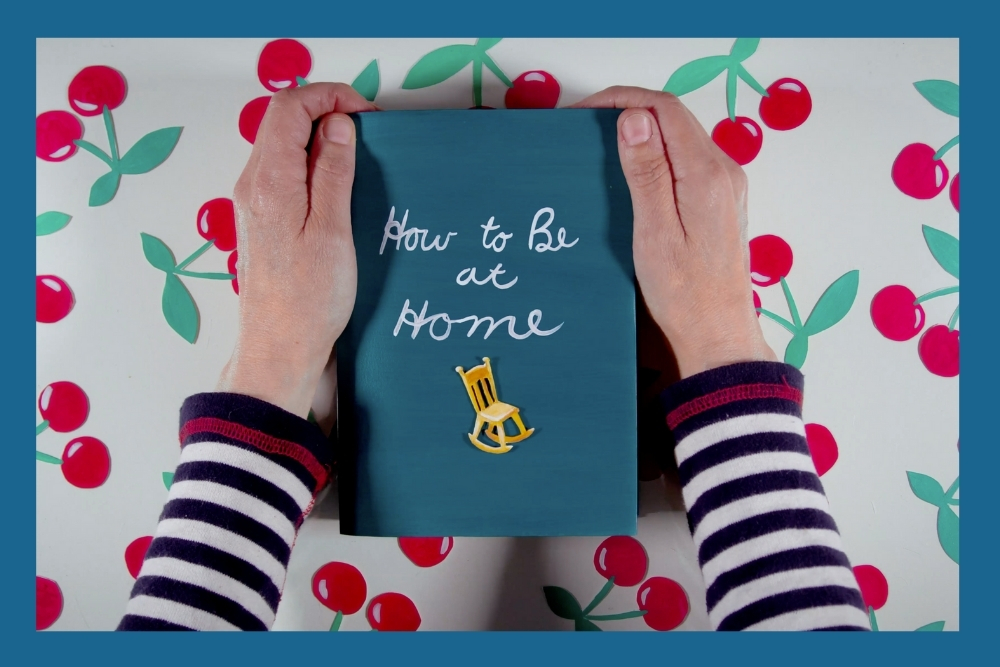 Isolation can be daunting and overwhelming, especially when it extends over long periods of time or when it’s imposed upon us. While we all process loneliness differently, this is currently a collective experience shared across the world. With the hope that their moving work might help you cope with isolation, we want to present a unique and inspiring perspective from two Canadian artists who not only accept but embrace solitude.

In 2010, filmmaker and artist Andrea Dorfman and musician and poet Tanya Davis created the audiovisual poem How to Be Alone, which soon became a viral hit. In it, Davis’s musings explore the topic of loneliness. Earlier this year, Andrea and Tanya found themselves talking about making a follow-up to their 2010 film. “Shortly after we spoke last spring, Tanya came back to me with a gorgeous and affecting poem, ‘How to Be at Home,’” recalls Andrea. “Of course I wanted to make a film to it and started to compile images in my head. Soon after that, I was approached by the National Film Board of Canada who were asking filmmakers to make films in response to the pandemic. It was perfect timing and enabled me to be financially supported for the next three months as I worked on the film.” The result was the animated short film How to Be at Home, created in Andrea’s studio in Halifax, Nova Scotia, while in social isolation through the spring and summer of 2020. The short film features Tanya’s poignant poem on isolation in times of Covid, illustrated and animated with Andrea’s dynamic and joyful artwork in vivid colours and a handcrafted feel.

Tanya’s words are so evocative and soothing that we were curious to know how she felt about solitude. “I enjoy solitude when I get to choose it,” she says over an email interview. “Not so much when it’s forced upon me due to pandemic restrictions. It nourishes me, calms me down, helps me settle within myself so I can connect again with people later. I can be a quiet person, and I don’t always want to talk. I like the freedom one gets in solitude to just sit there, think, observe. And I do need solitude so I can write.”

With almost 100,000 views on YouTube, the short film has been very well received. It’s an empathic nod to the pain of being alone but also an invitation to lean into loneliness as it can teach us a lot about ourselves – if we allow it. For some, solitude is even necessary to create, to help them find their voice. Yet aloneness is often dreaded, and that’s why it’s such an important subject to address. “I think loneliness is universal to humans,” says Andrea. “I also think it’s necessary to be able to exist in our loneliness, to not be terrified about it. I need to spend a lot of time alone in order to create art. I also need to be alone to just BE, to feel calm, to meditate and to focus. Sometimes just to think. I cherish and have made good friends with this time alone because this is where my art comes from. I sometimes wonder if loneliness is the fear of aloneness and, if we can see our times alone, when we can go inside and support ourselves, as valuable, we won’t be so afraid of it.”

Tanya agrees that loneliness is a common human experience and that there’s always room and reason to talk about it. “Everyone experiences loneliness, to varying degrees and for different reasons, and we all understand it,” she says. “So, ironically, loneliness connects us. Even before a global pandemic brought loneliness to epic levels, it was already a very universal experience (and a worrying global trend). I feel less debilitated by my loneliness when I talk about it. I feel more connected – to other people, the world around me – when I acknowledge its presence.”

Like many artists navigating confinement, Andrea and Tanya have found that their practice can bring relief and perspective. Creating often helps us find our voice to then resurface a little bit stronger to keep going. For Tanya, writing is an outlet: “It helps me make sense of what’s going on around me,” she says. “It helps me parse through my thoughts and understand strong emotion. Sometimes writing feels like therapy, like I have a place to unwind and unleash, without judgement. Admittedly, when I’m super riled up with anxiety or sadness – as I have been often during this pandemic – I can’t focus enough to get much writing done. I can write maybe a line or two, a brief idea, but it’s hard to sit and focus when emotion overwhelms. I try to go easy on myself on days like that. Come back to it later. Overall, writing is a steadfast companion and it’s been a lifelong practice of mine, ever helpful.”

We hope that How to Be at Home’s heartwarming words and images bring you hope and comfort in knowing that our shared humanity connects us, as Tanya’s last verse so compellingly illustrates:

If this disruption undoes you
if the absence of people unravels you
if touch was the tether that held you together
and now that it’s severed you’re fragile too
lean into loneliness and know you’re not alone in it
lean into loneliness like it is holding you
like it is a generous representative of a glaring truth
oh, we are connected
we forget this, yet we always knew.

10 Inspiring Quotes to Keep You Feeling Creative This Inktober

Robyn @ Paperblanks - October 11, 2018 2
We've reached the halfway mark of Inktober, the point of any challenge when inspiration begins to wane and participation starts to drop off. So...