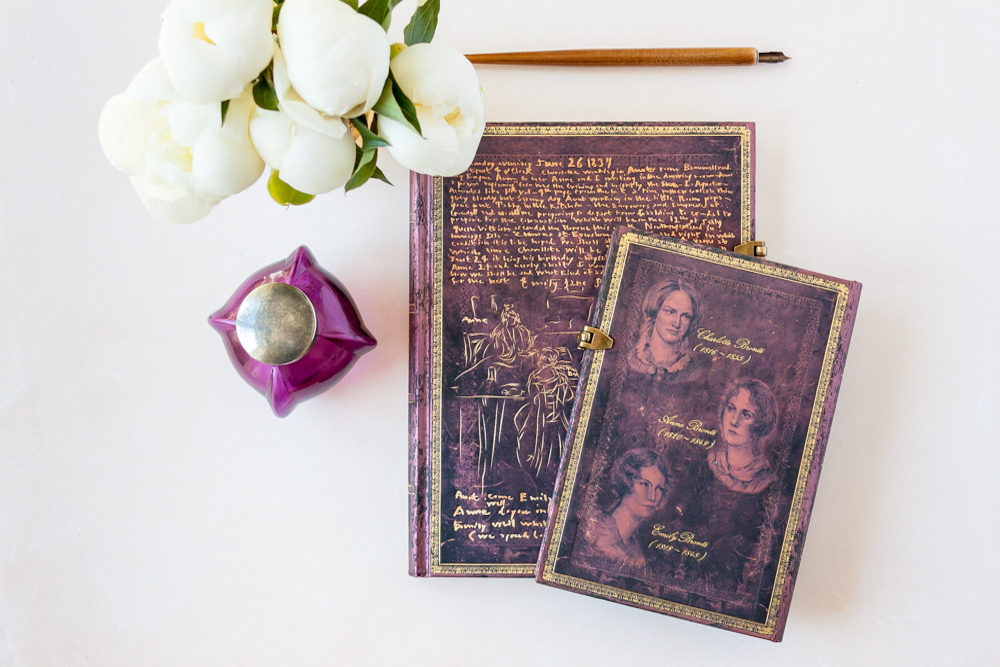 In celebration of Women’s History Month we’d like to honour the female artists behind our covers – from writers of classic masterpieces to contemporary painters.

Michiko Kamee is the Japanese contemporary artist behind our Kikka cover, which reproduces Kamee’s “full of chrysanthemum” design originally hand painted with gold overglaze and colour on a teacup. This design was created in the traditional Satsuma style (17th–19th centuries), with gilded polychromatic enamel overglaze applied to the surface in a variety of delicate brush strokes. This decorative style was in high demand in Europe during the second half of the 19th century, and Kamee’s detailed rendering shows off the techniques of Kyo-Satsuma through precision in line, colour choice and breathtakingly beautiful gilding.

Our Free Your Mind series recreates work by German artist Catrin Welz-Stein. In this series, Catrin combines elements of surrealism and the subconscious mind to create beautiful and complex images. Drawing on her extensive background in graphic design, Welz-Stein’s art displays influences from varying mediums, from classic children’s literature to surrealism and folklore.

Mila Marquis is an artist living in Hamburg, Germany, with her two sons, a dog, two mice and a turtle. Mila’s art combines sparkling emotion and unashamedly sweet depictions of fairies, fawns and flowers that cajole even the heaviest spirits to soar. Using a variety of media, including crayons, coloured pencils, gouache and acrylics, Mila creates small dreamscapes inspired by the positive things in life. Her ethereal, joyous images featured in our Mila Marquis Collection are little bliss bombs for the spirit.

Our Kirikane Collection reproduces artwork by Japanese artist Sayoko Eri, a devoted revivalist of the ancient kirikane technique, which translates from Japanese to “cut gold” and is an art form traditionally used to decorate Buddhist artifacts with gold metal leaf.

Sayoko’s work has earned her several accolades, including the President of Japan Art Crafts Association Prize, the grand prize of the exhibition, in 1991 and the Prince Takamatsu Memorial Prize in 2001. She has also won many prizes in the Kinki District exhibitions of Japanese Traditional Art Crafts Exhibitions and the Seventh Category exhibitions of Japanese Traditional Art Crafts Exhibitions. Eri was honoured as an Important Intangible Cultural Property (Living National Treasure) of Japan on July 8, 2002, for her expertise in kirikane.

Our charming Tracy Walker’s Animal Friends series features the work of Canadian illustrator Tracy Walker. From the moment she moved to Canada from England as a child, Tracy was smitten with the natural world. Trained as an artist, illustrator and graphic designer, she has a steadily growing list of works commissioned by those attracted to using her alluring visual language as a means of communicating their message. Tracy’s distinctive style shows through in all her creations, blending nature motifs with symbols, icons and simplified shapes largely characteristic of 20th-century art.

Olena Skytsiuk is one of the foremost practitioners of Ukrainian “Petrykivka” painting, a style born in the 17th century. Olena’s background as a Petrykivka painter combines formal training received from the Lviv National Academy of Arts with her own family tradition. Compared to traditional paintings which are dominated by red, yellow and green, Olena’s colour scheme can be described as more sophisticated due to the abundance of shades employed in her compositions. In our Olena’s Garden series, the lush floral ornament looks drenched in the sunlight, as if each colour was transformed into a brighter, more fantastic version of itself.

Contemporary artist Yuko Nishimura fuses the traditional Japanese techniques of origami and origata into works of art that are entirely modern. Her tessellations, reproduced on our Ori series, suggest constant movement even when the journal is lying completely still.

“Only by folding one piece of paper an expressive masterpiece can be created,” says the artist. “This is the Japanese way of folding. In order to link the past with future generations regarding the form of folding, I do not limit myself to the category of origami but consider the pursuit of any possibility of folding paper.”

Amy Jade Winehouse (1983–2011) was an English singer and songwriter known for her powerful deep contralto vocals and her eclectic mix of musical genres including R&B, soul and jazz. The top-selling British artist of the 21st century, Winehouse revitalized soul music with her brassy, sweet-and-sour voice and her timeless sensibility. She composed her own songs and was also a talented visual artist. Seen on our Amy Winehouse cover is a self-portrait and lyrics from her song “Tears Dry on Their Own” from her 2006 album Back to Black. Royalties from the sale of this journal will go to the Amy Winehouse Foundation, a global charity that helps prevent the effects of drug and alcohol misuse on young people.

There has yet to be another family to enrich the Western literary canon in quite the way that the Brontë sisters did. Today, their legacy is one of the most revered in English literature.

They wrote novels whose profoundness, subversive characters and fierce emotions stirred the rigid society of Victorian England and assured the authors lasting literary fame. In honour of the bicentennials of their birthdays, we have created this Special Edition dedicated to sisters Charlotte (b. 1816), Emily (b. 1818) and Anne (b. 1820) Brontë.

We can’t think of a better way to celebrate Canada’s women writers than to feature one on an Embellished Manuscript cover! This journal features a handwritten page from one of the most beloved children’s novels of all time, written by Canada’s own Lucy Maud Montgomery. Anne of Green Gables is an iconic piece of Canadian literature and a beacon for children around the world. As soon as it was published in 1908, Anne of Green Gables found its readership and made its author enormously famous. Lucy Maud Montgomery stands out as having created a timeless character that has charmed children all around the world. What’s more, as a Canadian writer, Montgomery is a particularly apt addition to our Paperblanks collection – with us being proudly Canadian, too.

Laurel Burch was an American artist with an unmistakable style that was the physical manifestation of her love of life. Laurel began as a self-taught artist and then became a pioneering businesswoman at the head of a merchandising empire. From her fertile imagination she created vibrantly coloured and exquisitely embellished works of art, such as the paintings reproduced on our Laurel Burch Collection covers. Her pictures are filled with imaginative visions, lively colours and living creatures that show how there is as much magic in natural as there is in supernatural.

Announcing The Winners: Plus, The Top 20 Paperblanks Designs As Voted...

Paperblanks Team - August 15, 2012 0
The results are in! To celebrate our 20th anniversary we held a contest asking fans to determine the top Paperblanks covers from our 20...