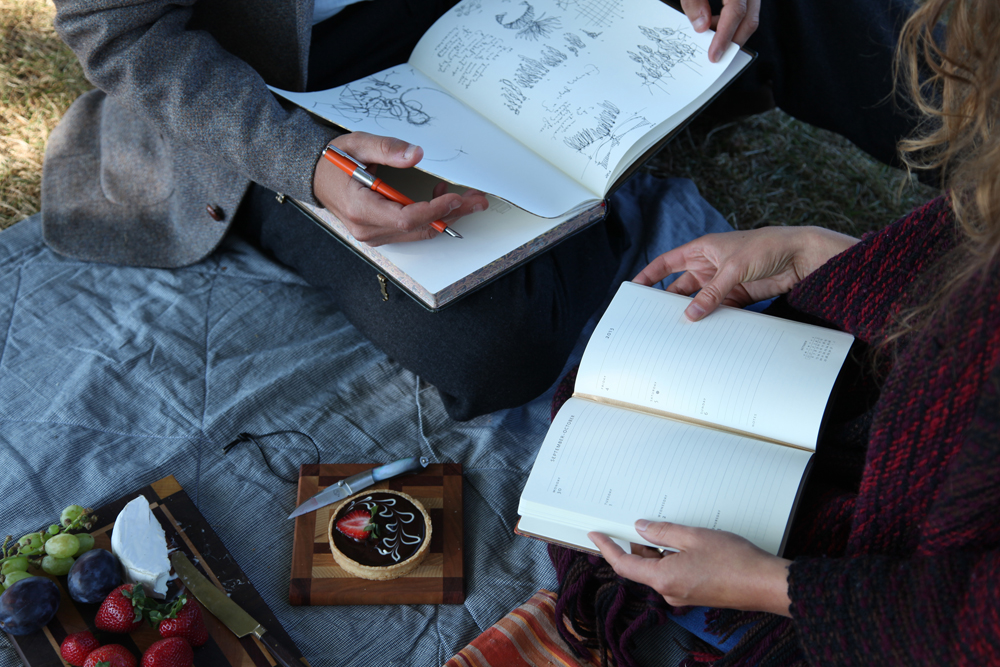 When it comes to keeping a journal, everybody has a slightly different style. And though no two personal notebooks are ever the same, the people keeping them often have something in common. With the recent success of HBO’s True Detective series, we couldn’t help but be intrigued by Rust Cohle’s use of his ledger-sized notebook. As played by Matthew McConaughey, Detective Rust Cohle is an incredibly serious (darkly so) and studious taker of notes, and the show didn’t waste the opportunity to call attention to this particular practice. Watching such a prolific journal-user week after week on the small screen got us thinking: Along with the super serious police detective, what other types of characters are prolific journal users?

The Aspiring Writer – Harriet the Spy

In the popular children’s book Harriet the Spy and its movie adaptation, Harriet is an eleven-year-old girl who, living comfortably on the “outside” of the popular groups at school, turns her love of writing into a personal spy mission. Filling her “Private” notebook with reflections on the people around her (including, to her ultimate detriment, her best friends), Harriet is a mad-journaller whose notebook is almost as iconic as she is. If you’re like Harriet, you love writing and take inspiration for your stories and characters from the world in which you live. But there’s an important lesson to learn from Harriet the Spy: unless you keep your notes under lock and key, you’d better be careful about how you describe those close to you!

The Daily Drama Chronicler – Elena from The Vampire Diaries

For Elena, a diary is something both private and uniting. Her first journal was a gift from her mother when she was ten years old, and with her mother long deceased Elena carries on her daily documentation as a means of staying close to her roots and to better understand her everyday feelings. If you’re like Elena, you have a lot of emotions that you would prefer to keep private, but that doesn’t mean you want to ignore them. By writing down her interactions (and internal reactions), Elena is able to push herself to move out of her sadness and into the real world (well, as real as a world populated by witches and vampires can be). Daily journals like Elena’s are therapeutic ways of coming to terms with your most private emotions and desires, and are helpful tools in moving beyond what’s holding you back from becoming your best self.

To say Rust Cohle is a serious guy would be more than just a “serious” understatement. It would be a grave one. This is a man who has seen it all and put it all down in his A4 ledger. Within this tortured soul, though, lies a highly competent and uniquely intuitive detective. If you’re like Rust Cohle, you may not view the world in as grim terms as he does, but you likely prefer to thoughtfully take in and analyse a situation before moving to action. Dialogue isn’t your strong suit, but you never utter a word you aren’t absolutely positive is the best one to reflect your thoughts. Journallers like Rust Cohle often spend more time taking notes on an event than participating in the event itself, but you can bet they will come back with some thought-provoking statements on the subject when they’ve had time to think it through. And, for good or bad, they remember everything.

“I’ve always taken a lot of notes. You never know what the thing’s gonna be, do ya? The little detail somewhere down the line that makes you say, ‘ah!’” -Rust Cohle

The Treasure-Hunting Traveller – Henry Jones, Sr. from Indiana Jones and the Last Crusade

The Grail Diary in Indiana Jones and the Last Crusade is almost as influential a character as the man who possesses it for much of the film, Indy himself. When Jones receives his father’s diary (which is the result of Jones, Sr.’s years of research into the Holy Grail) he immediately recognises that something is amiss, and thus the diary is the catalyst that sets off the entire movie as Indiana Jones tracks his kidnapped father across Europe. Over the course of the film viewers get numerous glimpses at the jam-packed journal, and by piecing together its contents one gets a fairly strong impression of the man that created it. If you’re like Sean Connery’s character Henry Jones, Sr., you a world traveller with an unquenchable curiosity. Journal keepers like Jones, Sr., are archivists, keeping clues from the places they visit. These journals are timeless mementos, and are perfect for uniting generations on treasure hunts or simply on a trip down memory lane.

Do any of these archetypes match your journalling style? Let us know in the comments!

Paperblanks Team - November 9, 2012 0
In time for the release of Steven Spielberg's movie about Abraham Lincoln, we wanted to share with you this diary entry from Monday, April...