The latest Paperblanks television appearance is perfectly fitted for this spooky Halloween weekend! An Old Leather Black Moroccan mini reporter appeared on the series premiere of Dracula on October 25th.

After recently arriving in London, the famed vampire runs across a woman who greatly reminds him of his ex-wife who was burned to death (by lori). He asks the journalist boyfriend of this woman to interview him so he can get closer to her. But judging by the notes in the mini reporter, Dracula won’t be receiving a dinner party invitation any time soon! Have You Spotted a Paperblanks Book on the Screen? 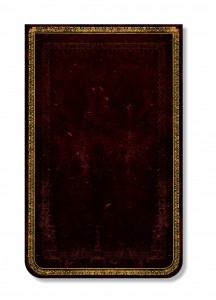 Paperblanks writing journals have appeared in movies, TV shows, music videos and other forms of media. If you’ve spotted any Paperblanks screen appearances please write us in the comments section below or via our Facebook page or Twitter!

Robyn @ Paperblanks - January 24, 2018 0
American novelist and designer Edith Wharton made a name for herself in the literary world by combining her firsthand understanding of the American aristocracy...