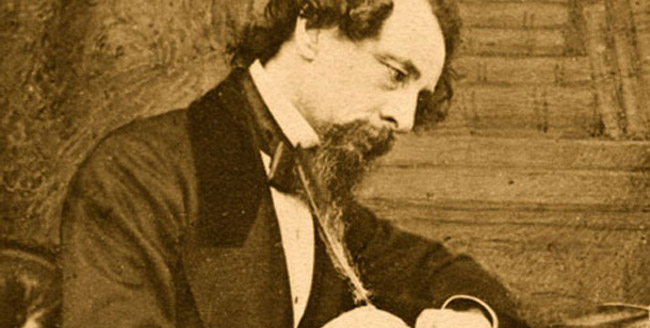 Charles Dickens (1812-1870) is heralded as one of England’s foremost novelists, with his rich prose, remarkable characters, and vivid and detailed depictions of Victorian society. Born in 1812, Dickens witnessed first-hand the class inequalities of British society during the height of the Industrial Revolution. His works highlighted the challenges faced by the working poor and disadvantaged. Famously prolific, Dickens wrote his novels in installments, as was common in the era. Dickens’s keen perceptiveness and poignant social commentary contribute to his immense popularity with readers, both during his lifetime and to this day.

Find below a list of what we consider to be 5 great works by the remarkable novelist.

And view our profile of Paperblanks’ Charles Dickens, Our Mutual Friend journal, which features a cover that depicts an original manuscript page from Dickens’ last novel, to learn about our unique tribute to Dickens.

Great Expectations, Dickens’ 13th novel, is a coming-of-age story about a young orphan named Pip. The book is unusual for Dickens’ because of its length (it’s not quite as sprawling as his other works). In fact if not for constraints set by the publisher it would have been twice as long! Today many believe its tightness to be an asset over his other works. And while it may not be Dickens’ favourite of his works (see below), he once called it a “close second.” Dickens wrote in the book’s preface that “Of all my books I like this the best.” One of the possible reasons why: it’s probably his most personal work. Not only does the titular character’s story match many details from Dickens’ own life, they also share similar initials! While not his most popular or well-known work, many believe Bleak House to be Dickens’ most accomplished and mature work as a writer. True or not it’s certainly his most complex and voluminous novel! One of Dicken’s most imaginative works, A Tale of Two Cities centers around Paris and London in the lead-up to the French and American revolutions. It also features one of the most famous opening sentences in English literature: Certainly one of Dickens’ darkest and gloomiest books, Little Dorrit concerns the subject of debtor’s prison and works as a criticism of the government of the period. As to its significance in the Dickens’ canon? According to Deb Gettelman, a professor at the College of the Holy Cross, Little Dorrit is the best novel to read to understand Dickens’ consciousness as a writer. Andrea @ Paperblanks - June 17, 2021 0
There’s a certain element of comfort in spending an afternoon at a bookstore: sitting in the cozy armchairs, finding treasures in the special collections section,...