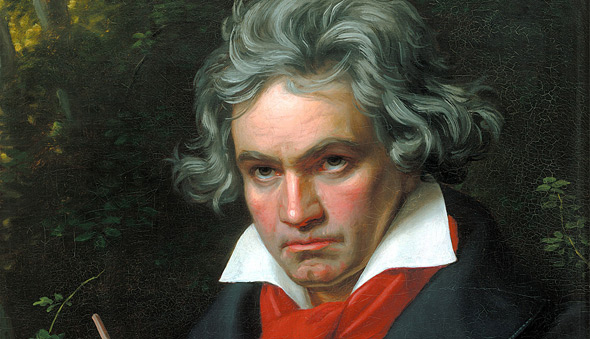 Often described by musicians as a “giant,” Ludwig van Beethoven’s (1770-1827) works are defined by intellectual depth and honesty. His musical expressions of heroism and struggle echo his troubled personal life. Beethoven’s childhood fell prey to the ambitions of an alcoholic father determined to turn Beethoven into a prodigy. When Beethoven began to go deaf in his late twenties, that didn’t prevent him from going on to create many of the most important works in classical music. Beethoven was tortured by love of unavailable women and in his later life his behavior became increasingly eccentric. His powerful and stormy compositions are a reflection of his interior turmoil.

To check out Paperblanks’ tribute to this musical “giant”, find out about the journal we made from Beethoven handwritten musical sheets for Violin Sonata no. 10 in G Major.

And see below for a sampling of what we consider to be 5 great works by Beethoven. The individual tracks are performed by various artists on the online audio distribution platform Soundcloud.

Paperblanks Team - March 4, 2013 0
Continuing our series examining Leonardo da Vinci's notebooks, this week we're profiling the Codex Arundel, which is considered by some to be second in...